A Word on Worry 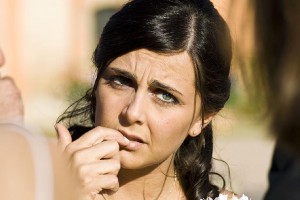 I don’t think of myself as a huge worrier but I find that in moments of experiencing something really good I can switch very quickly to feeling worried. I sometimes wake up in the middle of the night gripped by worry over things that would not worry me for a second during the day (very annoying) and I also tend to worry about things that I can do nothing about. I realize that it’s fear, but I haven’t known how to deal with it until I came across The Big Leap: Conquer Your Hidden Fear and Take Life to the Next Level by Gay Hendricks.

In his book, Hendricks shares a personal story of a great career moment that was than overshadowed by worry over the well being of his daughter who was away at camp. Though unrelated to his achievement it took away all his good feelings about what he was experiencing professionally. After making a frightened phone call it turned out the worry had no basis in reality. Since his life’s work is to investigate how we create our own “upper limit” to what we can experience or achieve, he recognized his worry as a self-inflicted limitation.

“Worrying is usually a sign that we are upper limiting. It’s usually not a sign that we are thinking about something useful.  The crucial sign that we’re worrying unnecessarily is when we are worrying about something  we have no control over. Worrying is useful only if it concerns a topic we can actually do something about and if it leads to us taking positive action right away. All other worry is just upper limit noise designed by our unconscious to keep us safely within in our zone of excellence or zone of competence.”

Hendricks’ advises that if what you are worried about is something that you can take positive action around than do it. If it isn’t than it may be your way of “choking the flow of positive energy”. He has a 7-step action plan for dealing with worry. However, its been just as useful for me to follow the first two steps which are to notice that I’m worrying, decide if there is any action I can take, and if there isn’t to let it go. That might seem trite, but it’s actually easier to let it go when I have the perspective that the reason that I’m worrying is to make myself feel bad as a way to limit myself. With that perspective I can let go of the worry thoughts much faster and keep them at bay for longer. Not to say that I don’t worry but I have a different way of handling it that fits with my world view. I’m someone that believes in action. So if there isn’t an action I can take, I like knowing that the worry isn’t because I’m sensing some impending danger or my world is about to collapse, it’s that I’m keeping myself small and who wants that?