This year I made the goal of streamlining my business. I finally got it done at the end of January and now in March I can’t believe I didn’t do it sooner. I essentially cleaned out and de-cluttered my digital office and it gives me the same feeling as walking into my home when it’s clean and organized. Happiness. Space. Ease. Breathing room.

Okay here’s what I did.

Streamlined Goals: I took my goals for the year and I put them on my phone. You know how you can gather your apps into little groups and you can name those groups? Well I named the groups according to my goals. You only get a few characters of space so I had to be succinct and clear with my goals and make them mostly numbers, one word, or a short phrase. At first this annoyed me but now I think its genius. I know at all times my business, financial, health, relationship, and travel goals. I also have my intentions in there, which are not goals, but good reminders of what’s important to me. 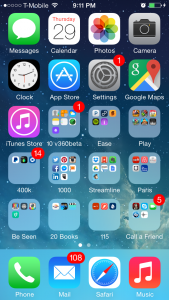 Become a Digital Minimalist: I moved everything off my computer. I use Dropbox and I pay for an upgraded account so I can have the extra storage. When I go into my dropbox folder everything is organized. For instance, my business is organized into 4 folders only. One for clerical and accounting items and the other three are for the main drivers of my business. That means that my filing system is constantly reminding of where to focus my time and energy in my business. Plus every single document is tucked neatly in a subfolder. That means that there are no documents hanging out in space because I did not properly file them in a folder. This is equivalent to having no random papers on your desk. Think West Elm desk ad. This took forever. It forced me to go through so many files on my computer. I went delete crazy but I also found some pearls I had forgotten about. Now I can find anything I need so much faster than before. Let me repeat that, I can find everything. I also moved all my personal photos into dropbox, that has been revolutionary. If my computer died, got stolen, or met some other terrible fate I would not lose anything. That’s amazing.

Created a System to Capture Everything I Want/Need to Remember: The last and probably most important thing that I did was created as system for capturing new information, creating content, and generally organizing my thoughts using Evernote. I mean really using it and using it properly. I had no idea of all the features and I never took the time to learn. This has hands down been my most important creative tool and although I’ve been a casual user for years, I finally invested the time to learn it. My favorite use of course is to keep track of my commitments. I’m so excited about it that I’ve been thinking about doing a free webinar for you guys to show you how to use it. Let me know if you’d like that.

Bottom line, organizing my virtual office was intimidating at first. Letting go of having everything on my computer felt like a leap of faith. Getting to know the in’s and out’s of Evernote was something I put off for way to long. Putting my goals on my phone – means occasionally I have to pass on a morning pastry because I decided to check my email while in line at the coffee shop and was reminded I still have 5 pounds to lose. But it’s all been worth it. Happiness. Space. Ease. Breathing room.