Grit, the big secret is out. 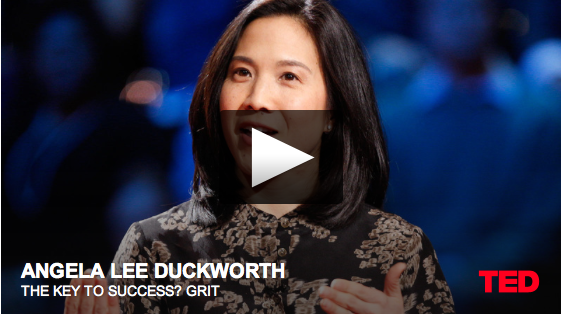 I caught this TED Talk by educator Angela Lee Duckworth and it struck me when she said the biggest predictor of future success in students was not talent or IQ, but instead grit. Yup, grit. If you aren’t sure what that means, here’s her definition:

“Grit is sticking with your future – day in, day out, not just for the month, but for years – and working really hard to make that future a reality.”

I first heard the term grit in Daniel Pink’s book Drive: The Surprising Truth About What Motivates Us. I decided to go back to it after I watched this TED Talk and discovered that he was referencing Duckworth and her colleague’s research. I had highlighted practically the whole section because it was one of my favorite parts of the book and one of my favorite subjects – mastery.

What I found really interesting about Duckworth’s talk, is where the research has left us, that grit is important, essential, not only for success but for mastery. But we are left not knowing how to develop grit in ourselves. It seems we either have it or we don’t. It was an “aha” moment for me. I recognized in myself a lack of “grit” in my 20s although I didn’t have that word, I could feel it. I could see that I needed something to keep me going, keep me dedicated, keep me growing. I had passion, but I had fear too. I had to battle procrastination, poor habits, and a poor self-image.

What helped me develop grit? Getting committed and being held accountable. I think what I was doing without knowing it was developing this quality in myself. Then later, helping others to do the same until it evolved into Accountability Works. I have people that stay with it for years. They say they get more done and their lives work better. When we take breaks they enjoy them but they also don’t do a lot of things that they were doing when they were being held accountable.

When I read those pieces about developing a new habit in 28 days or 60 days, I laugh because for me it can take years of consistent effort to create new habits, but who wants to hear that? We want a quick fix, an overnight change, results now. We want fast & easy. We are not taught to be gritty. I meditate regularly, I have been practicing at least 10 years, I still make the commitment, maybe I always will, but I do it and benefit from it. Should I be ashamed that I didn’t get that done in 60 days or should I celebrate that it’s something I want to do and look forward to? It takes grit to stick with something that’s not easy for a long time, I absolutely know that to be true. Accountability makes me gritty, or at least it gets me the same result – sticking with my future, day in and day out, over a long period of time.

Duckworth says educators aren’t sure how to teach grit, I humbly raise my hand and say, I have an idea we can try.