So I fell down the front steps of my house and there I was on my knees wondering how I ended up there and then realizing I was officially not in the moment, not being conscious, not remembering to breathe. I was staying up late and getting up early, forgetting to eat, and running on an engine of stress and anxiety. The unraveling started with the fall down the stairs, then turned into a missed flight, booking a rental car out of the wrong airport, and a terrible moment of panic when I realized I forgot to pick up the bridesmaid dress from the tailor for the wedding I was flying out to early the next morning – in Hawaii. I was spiraling and I was literally paying for it, extra airline miles, a $100 cab ride, an $85 Fedex priority overnight bill. 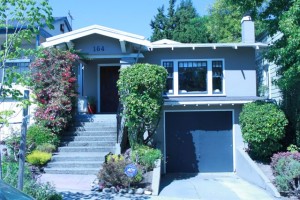 I learned a long time ago that when we get overwhelmed and we find ourselves in chaos it’s because we are avoiding something. We create the chaos so we don’t have to face what’s really bothering us. Our time is then taken up by dealing with the fallout instead of the source. It wasn’t until I was forced to take a real break in the midst of all my chaos that I was able to get back into the present moment. It came down to 15 simple minutes on the beach where I opened myself up to real and true appreciation that brought me back into reality. Ever since I’ve stayed grounded and calm and I feel like myself again. Now I can see what I’ve been avoiding clear as day. I’ve been afraid to move to Santa Barbara. It’s been in front of me for so long that now that it’s here I’m scared. It feels good to know what it is and not run from it.
A good friend, in a similar situation, told me that she was experiencing change as an energy. That she could literally feel it in her body and that she had to continually remind herself not to get caught up in it or let it take her mind over but instead allow it to dissipate. I realize now this was the opposite course of action from the one I took. Instead of allowing I was resisting, instead of dissipating I was manifesting chaos. Instead of letting change be change, I turned it into a ball of stress and fear. I learned that it takes a tremendous amount of self-awareness to manage change well. In hindsight, I would focus on the practices that keep us present. Meditation, yoga, journaling, getting into nature, writing down what we are grateful for, anything that nurtures the connection to self.